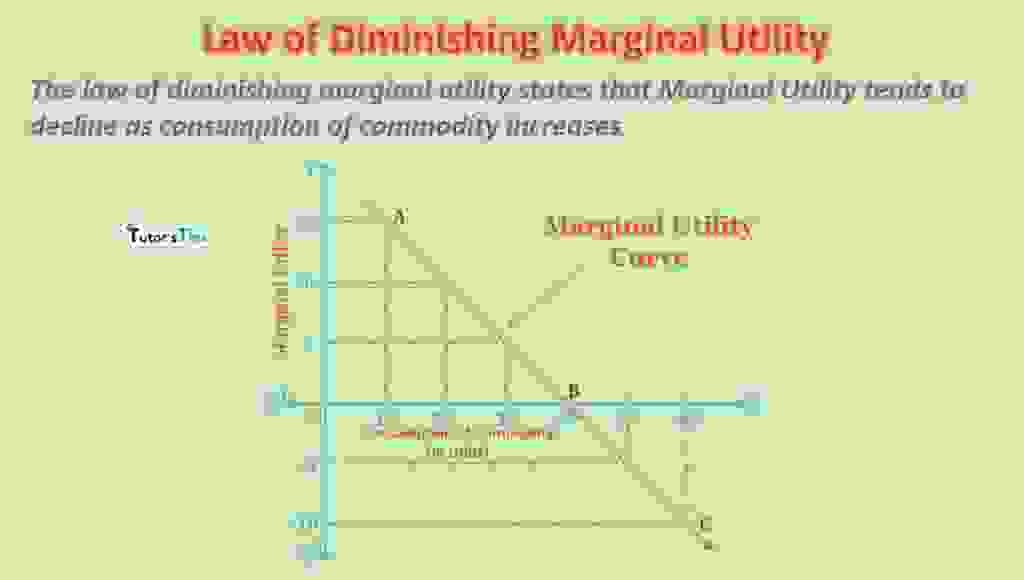 It refers to the additional utility derived from the consumption of one more unit of a commodity in a given period.

In simple words, MU is the change in total utility when more unit of a given commodity is consumed.

When the total utility increases with the increase in consumption of additional units of a commodity, it is known as a positive marginal utility.

When total utility doesn’t change with the increase in consumption of additional units of a commodity, it is known as Zero marginal utility.

When the total utility decreases with the increase in consumption of additional units of a commodity, it is known as a negative marginal utility.

The law of diminishing marginal utility states that as more and more units of a commodity are consumed, the marginal utility derived from consuming additional units keeps on declining. It is also known as ‘Fundamental Law of Satisfaction’ or ‘Fundamental Psychological Law’ as it happens in respect of all goods and services. This concept is used to determine the quantity of a commodity that a consumer is willing to buy.

Suppose, a consumer is hungry and buys a  burger to sate his hungriness, the burger will give him great satisfaction at first. After consuming one burger, he wouldn’t like to have another as his want is already satisfied with one burger. This is the case with most of the commodities.

“The additional benefit which a person derives from a given stock of a thing diminishes with every increase in the stock that he already has.”

The following table shows the consumption pattern and utility derived by consuming each unit of apples :

Relationship between TU and MU :

Limitations of Law of Marginal Utility :