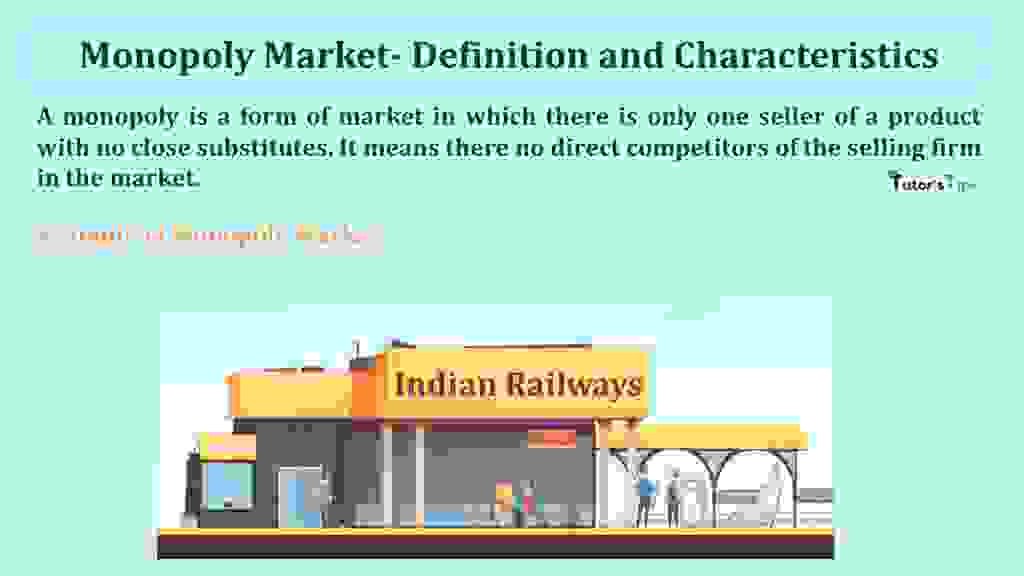 A monopoly is a form of market in which there is only one seller of a product with no close substitutes. It means there no direct competitors of the selling firm in the market.

What is Monopoly Market?

A monopoly market is a market structure in which a single firm is a sole producer of a product for which there are no close substitutes available in the market. Since there is only one seller in the market, it eliminates the rivals and direct competitors. Therefore, the monopolist has full control over its price. Hence, the seller in this market is not known as a price maker. The seller, by itself, determines the price and the quantity to be sold by him in the market.

Since this market consists of a single seller, It abolishes the difference between firm and industry. Hence, it is clear that the firm or market means the same in this market. Example: Railways in India are a monopoly industry of the Government of India.

“Pure or absolute monopoly exists when a single firm is a sole producer for a product for which there are no close substitutes.”

In the words of Prof. Ferguson,

“A pure monopoly exists when there is only one producer in the market. There are no direct competitors.

“Monopoly is a market situation in which there is a single seller, there are no close substitutes for the commodity it produces, there are barriers to entry.”

Some of the characteristics of this market are:

One seller and a large number of buyers:

Under this market, there is only a single seller or producer of a commodity. He may be a sole proprietor or group of persons or joint-stock company or a state. However, the number of buyers against one seller is large.

Monopoly is an Industry:

As there is only one producer or seller in the market, the difference between industry and firm disappears. Thus, it means that the monopoly can be said as an industry in the market. In other words, these two terms can be used in place of each other.

Restrictions on the entry of new firms:

There are some restrictions on the entry of new firms into the monopoly industry. Generally, there are patent rights, government laws, economies of scale, etc. which act as barriers to the entry of new firms. Also, a monopolistic firm has exclusive rights over the technique of production. Thus, due to the restriction of entry, the monopolist earns extra-normal profits in long as well as short periods.

Monopoly has no close Substitutes:

The product, produced by the firm should have no close substitutes. Otherwise, the monopolist will not be able to determine the price of the commodity as per his discretion. For example, there is no substitute for Electricity.

Being a single seller, the monopolist has full control over the price or us[ply of product. Thus, he can fix any price for his product. On the other hand, there is a large number of buyers, but the demand for a single buyer constitutes only a small portion of it. Hence, the buyer has to pay the price fixed by the monopolist. Therefore, the monopolist can be said as the price maker.

Absence of the Supply Curve:

Demand Curve in the Monopoly Firm:

Full control over the price doesn’t mean the seller can charge any price or he can sell the commodity at any price. Once the monopolist fixes the price, the demand depends upon the buyers. Consequently, if the price is low, the buyers will demand more and demand less when the price is high. Therefore, there is an inverse relationship between price and quantity sold by the monopoly firm. Accordingly, the demand curve slopes downward.

Here, DM is the demand curve for a monopoly firm. It shows the inverse relationship between price and quantity. OQ quantity is sold when the price is OP. When the price is reduced to OP1, the quantity sold increases to OQ1 from OQ.

It can arise in the following ways:

Thus, in short, in the monopoly market, monopolistic is a price maker who has full control over the price as he is a single seller in the market. Furthermore, there is no close substitute for the commodity in the market and is difficult for new firms to enter the market.