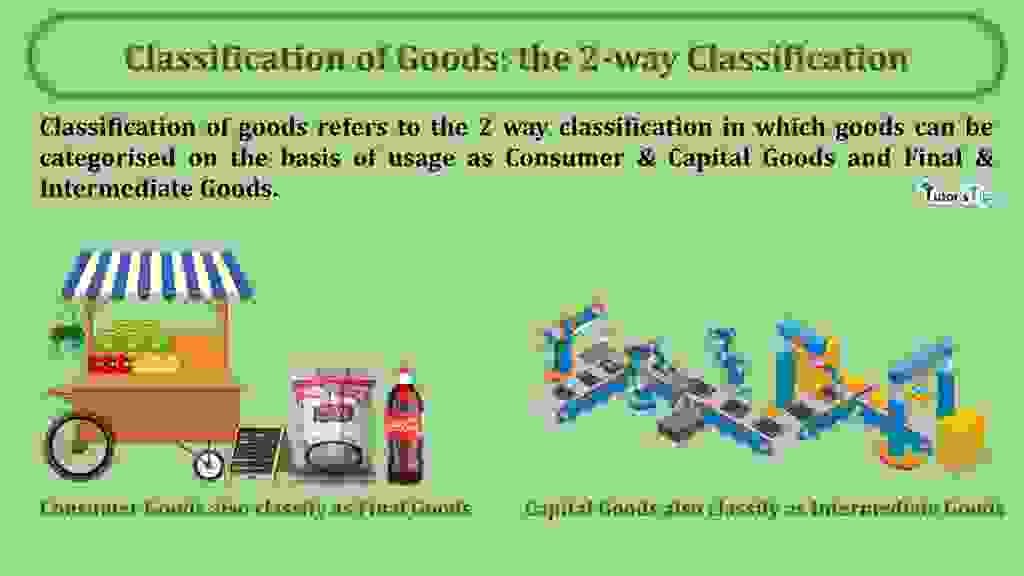 Classification of goods refers to the 2 way classification in which goods can be categorized on the basis of usage as Consumer & Capital Goods and Final & Intermediate Goods.

Goods can be anything which satisfies human wants and give them utility. Thus, production and consumption of goods are core elements of economic activity. In the market, There is a variety of goods available like toys for children, video games for adults, uniforms for school children, machine and tools for farmers and transport means for tourists. Therefore, each commodity or good carries different characteristics and economic value for its consumer. Hence, as per their characteristics or economic values, in macroeconomics, the 2-way classification of goods is used to categorise the goods.

Under the 2-way classification of goods, goods can be classified as:

In this article, we will discuss only Consumer & Capital Goods.

These are goods which are directly used by consumers for the satisfaction of wants and attain utility. Also, these goods are not used for any further production.

Consumer goods can be classified as:

The goods which are used for a shorter period of time and don’t have very high value, are known as Semi durable goods. Here, the shorter period includes a period of one year or slightly more.

The goods which are used for only one time, are known as non-durable goods. Therefore, these goods are also known as single-use consumer goods. Also, these goods carry relatively low value.

For example, tractors, equipment, plant and machines in a factory etc.

For example, producer goods include both:

(a) plant and machinery as fixed assets for production

(b) and raw material such as plastic

But, capital goods include only plant and machinery as raw material is is included in single-use or non-durable goods.

These goods are those which are finally produced and ready for use by the final users. Here, the final user can be a producer or consumer. Therefore, the classification of final goods can be done as:

The goods which are purchased by one firm from other firms for resale or for use as a raw material in the production process are known as intermediate goods. These goods are not ready to use by end-user.

For example, sugar used as raw material for the production of a sweet dish by confectioner is regarded as an intermediate good. On the other hand, the sugar used by households in tea or coffee for consumption would be regarded as a final good.