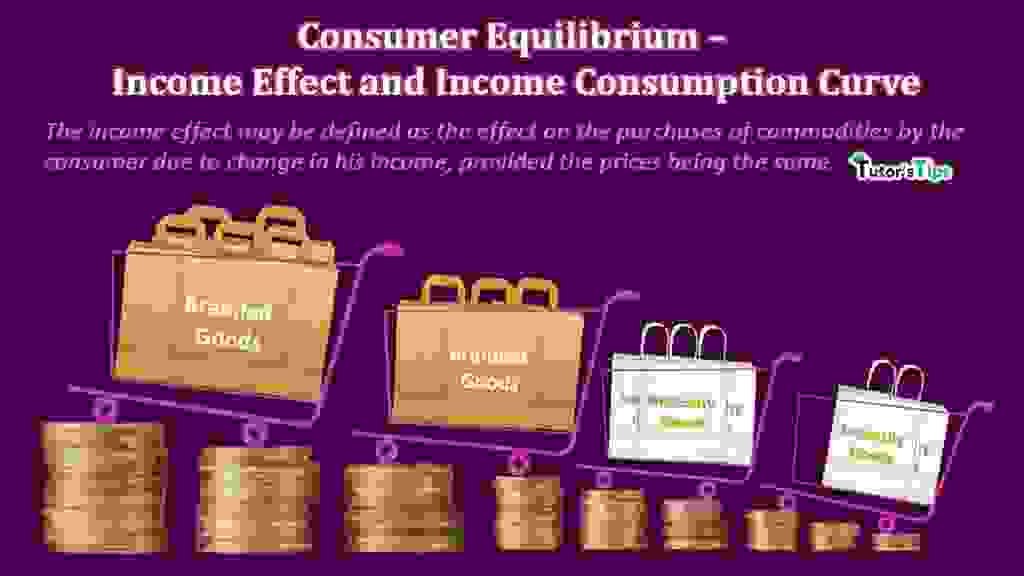 The income effect may be defined as the effect on the purchases of the consumer due to change in the income, provided the prices being the same. It implies, that the increase in income increases the satisfaction and the equilibrium point shifts upward to the right. Similarly, the fall in income decreases the satisfaction and equilibrium point shifts downwards to the left.

The income effect can be understood with the following graphical representation:

It is the curve that shows equilibrium quantities of two commodities that would be purchased by the buyer at different levels of income, keeping prices the same.

In the words of Ferguson,

” The income consumption curve is the curve which shows the points of equilibrium resulting  from various levels of money income and constant prices.”

The income consumption curve is explained with the following graphical representation:

The slope of the Income Consumption Curve :

The slope of the ICC curve varies with the type of goods involved. It can be classified as :

These can be explained as:

The slope of ICC is positive in case of normal goods.  As the consumption of both normal goods increases with the increase in income, the positive relation is defined. Hence, it is positively sloped if both goods are normal.

Suppose, commodity-1 is inferior and commodity-2 is normal. The following graph shows the relation of ICC when any of the commodity is inferior.

In fig, X-axis shows the quantity of inferior commodity-1 and Y-axis shows the quantity of normal commodity-2. Here, AB is the price line, drawn based on the income of consumer and given prices of two commodities, touches the indifference curve IC at the point E(Equilibrium Point). As the income of consumer increases, the price line shifts to the right to CD and then EF touching IC1

and IC2 at the equilibrium points E1 and E2 respectively. Consequently, the quantity of commodity-1 decreases from 3 units to 2 units and 1 unit respectively. Hence, the increase in income of the consumer is followed by a decrease in the demand for inferior commodity -1. The decreased income reflects the negative income effect.

By joining together different equilibrium points E, E1 and E2, we get the consumption curve that slopes back to the left. It indicates the negative income effect. Also, from fig, it is evident that the demand for normal commodity-2 increases from 4 units to 8 units and then to 12 units as the income of consumer increases. Thus, the income effect on normal goods is positive.

2.When both commodities are inferior goods.